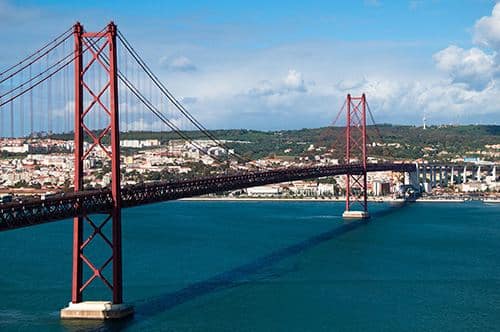 Lisbon’s 25 de Abril Bridge has been named “the most beautiful bridge in Europe” by Brussels-based travel organisation European Best Destination.
The distinction came in a top-15 list published online, which also includes the Dom Luís Bridge (Porto) in fifth place and the Vasco da Gama Bridge (Lisbon) in 14th.
The 25 de Abril Bridge also beat many other well-known bridges to first place on the list, including the Tower Bridge in London and the Ponte Vecchio Bridge in Florence, which came in second and third respectively.
Opened in 1966 under direct orders of dictator at the time António Salazar, the 25 de Abril Birdge is often compared to the Golden Gate Bridge in San Francisco, USA, as they are both suspension bridges and have similar colouring.
To see the full list, visit: www.europeanbestdestinations.org/top/most-beautiful-bridges-in-europe