2022 has been described as the hottest year in mainland Portugal since 1931, with a total of six heatwaves recorded, according to the annual bulletin released by the National Institute of Sea and Atmosphere (IPMA).

The average air temperature in 2022 was 1.38 degrees Celsius (°C) above the normal value recorded between 1971 and 2000, the period that this year’s findings are compared to.

The country recorded six heatwaves – one in May, four in summer and one in autumn – and the average maximum air temperature was 22.32°C, 1.82°C more than the normal value, according to the report.

The average minimum air temperature last year, at 10.96°C, 0.94°C above normal and the fourth highest in the last 91 years.

Described “as extremely hot in terms of air temperature and dry in terms of precipitation”, 2022 was a year in which 80% of the territory of mainland Portugal was deemed to be “in extreme severe drought”.

Total annual precipitation was 797.6mm, 84 mm below normal, with 70% of rainfall occurring in the last four months of the year.

Five episodes of intense and persistent precipitation were recorded, one in September and four in December, which “resulted in floods in several regions” of the country.

The IPMA report states that the arrival of extra-tropical cyclone Danielle in Portugal resulted in an average rainfall of 55.2 mm between September 12 and 15, accounting for 77% of the total for the whole month.

Regarding extreme values of air temperature, precipitation and wind in mainland Portugal, the bulletin reveals that the lowest minimum temperature, -7.5°C, was recorded in Mirandela (Bragança district) on January, 30 2022.

Meanwhile, the highest maximum temperature, 47°C, was recorded on July 14 in Pinhão, in the Douro region.

The highest amount of precipitation in 24 hours, 110.6 mm, was recorded on December 13, 2022 at IPMA’s Lisbon/G.C. station, while the strongest gust of wind, 119.5 kilometres per hour, occurred on December 11 at Fóia, the highest point in the Algarve, in the Monchique mountains.

Last year was the world’s fifth warmest since records began, according to global climate data collected by the European Union’s Copernicus Climate Change Monitoring Service and released on Tuesday.

It also stated that winters a well as summers are getting warmer in Europe, and more intensely so, as a result of rising global temperatures.

“As global temperatures rise, heatwaves and warm spells become more frequent and more intense, and this is not just limited to the summer months,” Freja Vamborg, a scientist at the Copernicus Climate Change Monitoring Service, told the AFP news agency, noting that “winters are getting warmer as a result of rising global temperatures.”

According to Vamborg, “the warming is most pronounced in winter” in northern Europe and “more evident in summer” in southern Europe. 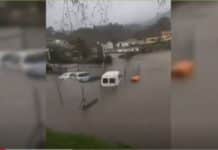