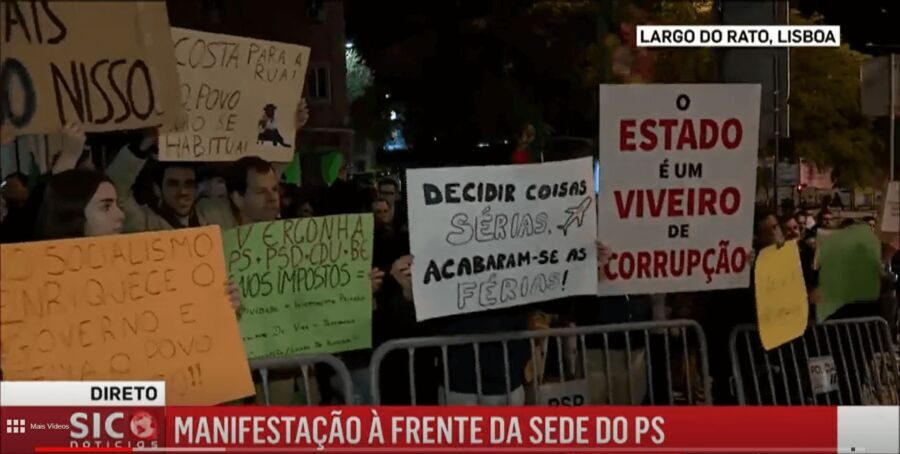 Seemingly out of nowhere this evening, two large protests have gathered outside Socialist Party headquarters in Lisbon and Porto.

According to CNN Portugal, there are as many as 1,800 people gathered in Lisbon; 200 in Porto.

The slogan for these impromptu shows of social unrest are “Socialist Government: Out”.

The protests began around 7pm. Even at time of writing (8.30pm) they were getting little traction on evening news bulletins.

According to one of the organisers, the objective is to “request explanations and create political pressure after so many ‘cases and little cases’ in the absolute majority Socialist executive”.

On a day when yet another member of the inner circle was forced to resign, the total number of casualties of those ‘in office’ in this current government has reached 13 in just nine months.

Explaining the reasons behind tonight’s initiative, one of the organisers told CNN: “”This started with a group of friends, young Portuguese, Lisboners, all employed in various areas, who decided, after what is happening in this Government, after so many cases and little cases, that there is little transparency. Explanations are needed, scrutiny is needed, and if not us, who is going to create political pressure?”

To be fair, opposition parties have repeatedly called for public inquiries – only to see their requests rejected by the absolute majority.

This evening’s citizens movement claims to be ‘non-political’. The protests are “completely peaceful”, albeit very noisy – with the sounding of horns and whistles. The whole idea is “to create visibility and major impact” and show feeling nationally, among the electorate, that ‘business as usual’ isn’t working.