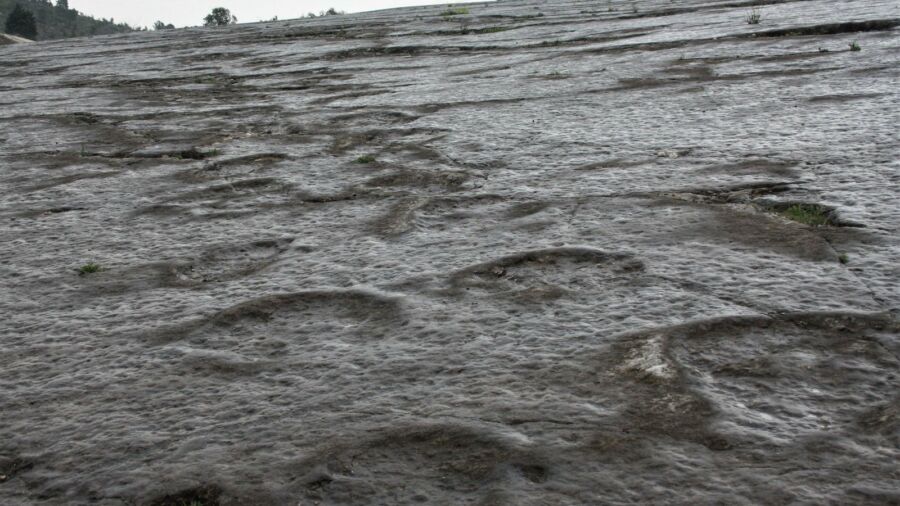 It’s August – and for those who don’t want to think about the drought/ health service meltdown/ airport strikes and wildfires, there is distraction in the form of a Visigoth belt buckle, ‘new fragments of a 16,000 year old engraving – and hundreds of largely unsung dinosaur footprints.

All these things have been discovered in different parts of Portugal, and are giving the archeologists and students involved in their classification reason for celebration.

The bronze belt buckle was discovered during a summer dig in Trás-os-Montes. It has been described as “a fantastic piece (…) an unprecedented find” given that up till now there was nothing to show any form of Visigoth occupation in Trás-os-Montes.

The site where the buckle was found, near the village of Garganta in northern Portugal is known as “the medieval necropolis of Touças”. But thanks to the buckle it looks like the site may go back even earlier than the Middle Ages… researchers are thinking 6th/ 7th possibly 8th century AD…

Even further back is the ‘new fragment of an engraving’ discovered in Côa, in a layer of excavations within the archeological park already officially dated from 16,000 years ago.

The discovery was made last Friday, and appears to be ‘part of a wall that has collapsed’ with the engraving (of a deer), “made by incision, not pricking”.

As archeologists involved explain, it’s fascinating to slowly reassemble a puzzle that is so incredibly old. (They discovered an early part of the engraving last year).

Looking after these incredible relics of the past is not an easy task, particularly as there appear to be no full time custodians of the site. This is the tragedy of Portugal – exceptional discoveries are made, and once they have been written about, no one seems to care.

This is where the dinosaur footprints come in: these were discovered in Bairro, Serra de Aire,  in 1994, classified as a natural monument in 1996, with an interpretation centre created a year later.

There are various ‘tracks’ with hundreds of footprints involved. Two tracks are 140 metres long – something “not found anywhere in the world”, says 90-year-old geologist Galopim de Carvalho.

But since then, the site has been “almost a desert”, he laments. Thus his “personal initiative” to draw worldwide attention to the site before he dies.

About to celebrate his 91st birthday, Galopim de Carvalho is calling for “an investment of millions” in a project of international value that recognises “the real scientific, educational and cultural importance of this heritage.

“My proposal for this geomonument may seem like an ambitious dream. But we all know that whenever we dream, the world leaps and advances,” he told Lusa today.

The project he has in mind would require millions of euros in investment, but could so easily capitalise on the crowds that visit the nearby religious centre of Fátima.

Galopim de Carvalho is currently gathering support. “Every day, the list grows”, he says, mentioning a number of institutions and personalities.

“With humility, I say that I am using my ‘magistracy of influence’, mobilising personalities with weight to help make this project a reality,” he told Lusa. Among the names are prime minister António Costa:

“He referred me to the secretary of state for tourism. I’ve also contacted the minister of science and am waiting for a reply. But getting past the heads of cabinet and secretaries is very complicated”, he admitted.

The nonegenarian knows that due to his advanced age he may not see his project come to fruition.

“With the time these things take in Portugal, I’ll die happy if I see the sketch…” he told Lusa, joking that even with a guarantee, he wouldn’t be at all surprised if nothing moved forwards for years.

The important thing is to push for it.